skip to main | skip to sidebar

Today is a planned easy day.  The whole reason for the marathon rush to get to Monza yesterday was to make an appointment with the good folks, and new friends at Cicli Casati. 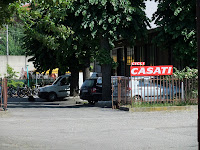 By way of backstory, I picked up the Casati Laser I'm riding a few years back from a guy in Kingston.  I knew nothing about the bike other than it was in my price range and size for a used road bike was brazed steel and had a nice mix of Campy Record and Chorus.   Long story short, fell in love with the bike, (the handling  comfort on level that surprised me) did a bit of research on the Casati brand and became intriqued by how little info was available.  So when planning this little tour I figured I'd be near enough to drop by so touched base and made arrangments specific for this day. The previous day was Feste della Republica, a national holiday and many people including those at Casati take vacation that week so the day was firm.

Anyway, I rolled out from the hotel on route to Via di Prampolino when the Casati workshop is.  On route I enjoyed a completely one way conversation with an older gentleman who stopped me to share tales of his cycling exploits, the champions he saw and some pretty grisly details of an accident where he (or someone else I'm not sure) got their index finger and middle finger mangled in the spokes while (I think) changing gears using a cambio corsa shifter.
The conversation is notable for a couple reasons.  One, it pertained to bikes, Two, it illustrates how randomly engaging the Italians can be despite big language barriers, and three,  I don't speak a word of italian and he didn't speak a word of english but nevertheless he got across all those details and more.

So, after a slight delay I rolled into the Cicli Casati courtyard and began an almost 3 hr tour during which time nobody got and real work done but lots of other fun stuff happened.
The first person I met upon rolling in was the patron himself. Gianni Casati.  Gianni doesn't speak much english or wasn't comfortable trying, but that didn't stop him from chattering a bit and making me feel quite welcome before handing me over to Stefania.  Almost all my communication throughout was done through Stefania who was my translator while on site so she got absolutely nothing else done while I was there.  Most of the detailed manufacturing questions were fielded by Luca Casati who, with Stefania translating, walked me through the processes of creating both custom and standard-size hand built bikes.
The frames are either silver brazed steel with or without custom cast Casati lugs, TIG welded aluminum, Titanium, or carbon . 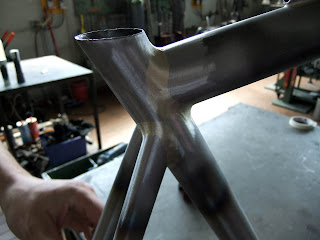 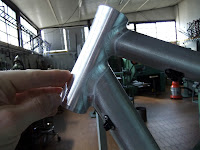 All the frames are hand built in this shop, including the carbon and they do a fair bit of mixing and matching different materials to utilize the inherent properties of the different materials.  A fairly familiar concept.  e.g. carbon fork and rear triangle with aluminum, steel or titanium main triangle but the details of how they do it and the tolerances that they do them to are what set them apart.  Some classic frames are built with catalogue (albeit top shelf) tube sets from Dedaccai or Columbus but many are custom sized and shaped and exclusive to Casati.  A prime example is the Marte. An all carbon rocketship with a custom carbon tubeset from (I think) Dedaccai.  The top tube has a longitudinal 'window' through it.  I honestly don't remember the exact explanation behind the window. I missed some details due to information overload and the verbal tennis match of having manufacturing details bounced via Stefania as intermediary.   ..I really need to learn Italian for my next visit..

I also have fewer photos than I'd like for the same reason but it's probably just as well.  I don't guess too many people are as interested in the finer details of manufacturing as I am.
This is something unique to some of Casati frames.  There is no visible seatpost clamp as it's hidden within the top tube and seat tube joint.  I tried to get a pic of the internal arrangement but Luca asked that that element not be photographed.  Nevertheless, I did see well enough how it works and while I had previously been leery of tightening the same clamp on my own bike, I now have no concerns whatsoever as the design is as robust as any external post clamp arrangement. 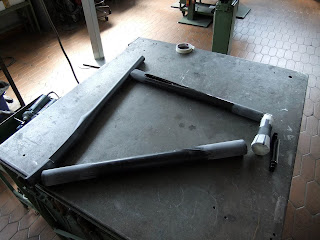 This is a layout table where the raw tubes get arranged, measured, marked for cutting and fitted.  Many things said were somewhat indestinct with the language challenges but they saw to it that one thing got across to me for certain.  That the fitting of the tubes was done to ensure complete accuracy and absolutely no gaps before any joining process started.  The number of times I heard this and the intensity that it was relayed made it quite clear to me that this is a extremely important consideration and that they take very very seriously. The initial fit has to be perfect or the bike will not be. 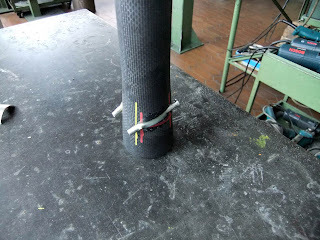 Marte headtube with internal cable routing sleeves.  The sleeves will get buried into the carbon wrap that joins the head and down tubes. 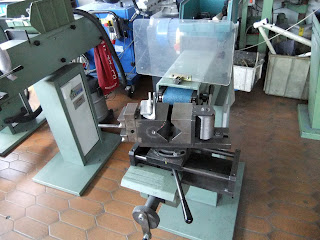 One of several tube mitering stations where the tubes are shaped to fit bottom bracket, head tube, each other, etc. 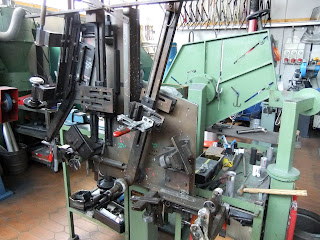 This is their fitup jig where the joining magic happens.  another one is behind it set back to back. 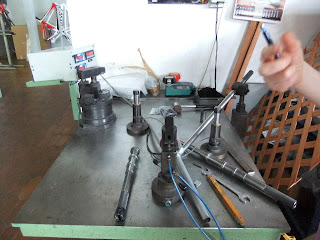 This is the digital inspection table where the frames are checked to ensure that all the steps up to this point have been successful in making sure the alignment perfect.

So that was the manufacturing process tour in  nutshell.

Some other fun bits.
The rack of tears. 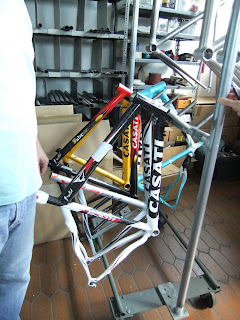 Owners bikes that have been sent back because of crashes.  Ranging from one with a dented top tube that Luca didn't seem to think would be a big issue for the bike to one with a crack right through the carbon top tube where Luca just shook his head and indicated in simple mime language that this one wasn't going to see anymore miles.. 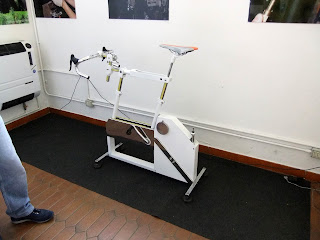 I got to spend some time on this baby too.  Getting fitted up for a a little 'upgrade'.  This was a fun experience.  Everybody sat quietly in a line of chairs watching me pedal. Occasionally Gianni would get up to adjust my posture this way or that.  Pushing my elbows in and down, relax my shoulders, flatten my lower back  etc. it would seem there's not much I actually do correctly. He drew imaginary plumb lines through various parts of me, issued instructions to Luca who would make corrections to the adjustable bike and after 15min or so he just gave a nod of approval and walked off.  The old boy was pleased and the fit was complete.  So for my frame upgrade I will need a new stem and all will be good.

I then spent a short while with Stefania sorting shipping and payment details during which time Luca kept disappearing and reappearing with more swag.  Gloves, hat, bottles.  nice touches.  I dig swag.

By then I'd been there well over 2hrs and was feeling concerned about knocking such a huge hole in their day.  Stefania invited me to join them for lunch but it was past noon now and I wanted to make it to Menaggio for evening.   As it turns out I should have stayed.  When finally I departed equipped with directions and a map to Madonna dei Ghisallo,  personal mobile numbers should I have want of assistance during my travels I got going to realize that the nagging dull pain in my knee that I'd felt towards the end of the previous day was feeling really a bit more sharpish and worrysome.   Consequently I ended up only making it to Lecco which is only 55km as a cautionary measure for the knee.   55k.  I totally could have stayed with the folks at Casati for awhile longer.   All the more reason to go back. 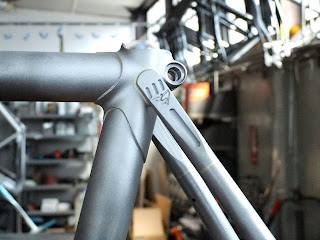 For lugged frames Casati has custom lugs cast for them. 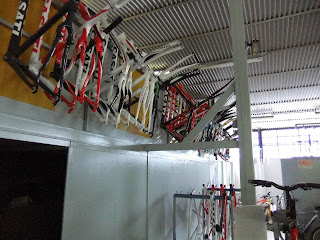 The rack of hotness. 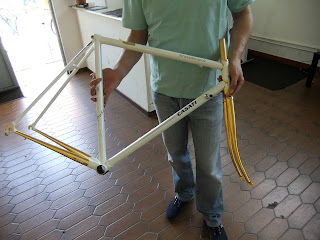 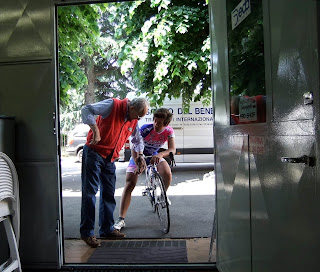 While I was talking to Luca a couple of the NGC Perrel-Casati  squad (Lampre U23 development team) rolled in for some mechanical tweaking. I got this shot of Gianni passing along some of his wisdom.   Casati has long sponsored amateaur road racing and  past sponsored riders include Gianni Bugno who rode on Casati frames for several years.  One of Bugnos Casati bikes is in the cycling museum at Ghisallo.
Posted by Kark at 8:59 AM

photos of the new ride??

In a fit of fumbled synapses I didn't take any pics of my new frame when I was there. Astonishing.

worth mentioning that it was only one of many racks of hotness I cast my gaze upon in Italy, but this was the only one I was able to photograph without receiving some stinkeye..

Casati, good work.. i will also try these brillinant ideas in my free time.. thanks for the post.. i really love these bicycles

Nirvana! What a privilege.
I've an old Casait Ellise Due I brought for a joke
And it's awesome.
Thanks again for letting the world get a glimpse of
Casati heaven. Chuffed.
Richard